There are more toys out there than you can shake a stick at.  You could say that busy toys are the new stick.  Many people are convinced that if they just buy enough toys, the right toy, their dog will stop pestering them with jumping, nudging, barking, whining and more.  They hope to buy calm.

But could your busy toy be turning your dog into an even bigger pest?  Yes, they can.  Your busy toys might be making pestering problems worse than they already are.

Many people fall for the idea that toys will be a cure all.  I don’t blame those new to dogs for falling for this idea.  The suggestion to give a dog a toy is pretty common.  Sounds good unless you recognize that it fails to clarify the critical detail of WHEN.

Here is the trap people fall into.  When their dog pesters, they cue (command) good behaviour such as a sit.  When the dog complies, they give a toy or bone.  Dogs can and do learn that behaviour happens in a chain or sequence.  The behaviour of barking, jumping or whining leads to the sit cue.  The sit leads to the busy toy.  Dogs aren’t stupid.  It doesn’t take a rocket scientist to figure out that pestering works really well if you want your human to deliver activities.  The human is trained to say sit when the dog pesters.  Sits are followed with activities. 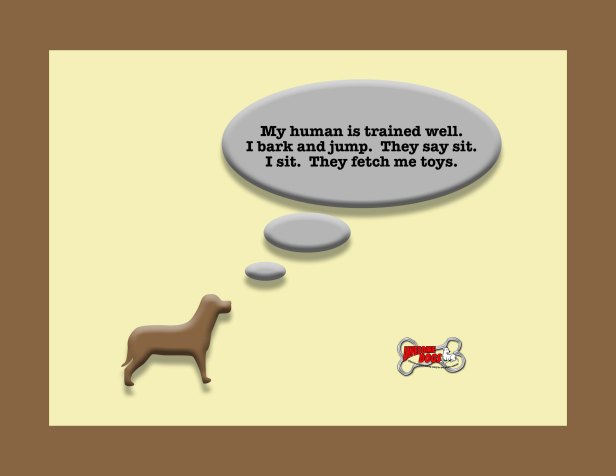 Behaviour does not happen in a bubble. People feel relieved that they get a temporary reprieve.  That reprieve lasts as long as the toy distracts the dog.  The cycle begins again.

Long-term, this is not what most people actually want from their dogs.  Few mind if their dog asks for things politely.  People generally want a dog that refrains from pestering, sits of their own accord, politely asking for something to do.  That won’t happen if the behaviour chain encourages things we do not like.

Busy toys go bad because we forget they are reinforcements that often sit in a chain.  Misuse them once too often with a clever dog and pestering escalates astronomically to obnoxious proportions.  People may feel that being positive failed to work.  In reality it worked EXACTLY as we expect it would.

In general there are a few things to keep in mind with busy toys, bones and other activities.

First:  Train your dog what to do.  Toys shouldn’t replace training.  They are part of training.  If a dog is only well mannered if sufficiently distracted, they’re not trained.  Good behaviours should be trained to fluency and that includes duration.  You can’t expect a dog to hang out for half and hour if you’ve only trained to 30 seconds.

Second:  Order matters.  You have a choice to cue the dog before they start to pester.  You can be proactive.  Avoid being reactive by waiting for misbehaviour.  Get good habits going and reinforce what you like.  If you want your dog learning to lie down while you watch the news then turn on the television, ask them to go to their place BEFORE THEY PESTER.  When they do so give them the bone.  Don’t wait for unwanted behaviour to swing into action.

Third:  Notice and reinforce good when you see it.  It’s easy to see bad.  It’s hard to notice good.  Make a point of calmly recognizing a dog for entertaining themselves.

Finally:  Once is a mistake, but repeated mistakes need evaluation.  All dogs at some point will get bored.  They may try to poke at us.  If it happens repeatedly, something is amiss.  Revisit training.  Balance out other needs like exercise.  Ensure that expectations are realistic.  Look at the whole of the problem.  There are no magic toys that will take the place of exercise, training or unreasonable expectations.

At the heart of the toy problem is that you need to reinforce what you actually like.  Being positive is more than just throwing cookies and toys.  It’s about thinking why, how and when you offer reinforcement.  That includes toys.

(I have used the word reward in some places.  The actual term is reinforce.  However, it’s important that people who are unfamiliar with certain terms are able to understand things clearly.  Hence…reward.  But it is reinforce.)