Several years back, I had a number of challenging dogs in class.  I work with a lot of rescue and feral dogs.  This doesn’t mean that I think that mutts are tough.  Rather, when dogs have a rough start, the odds of behavioural fallout are overwhelmingly high.  Not every puppy is born with a silver spoon in its mouth.  Many of my clients have dogs that were born on the wrong side of the tracks.

Those dogs had nice and highly permissive owners.  Those that work with animals will know what I mean when I say that permissiveness can be a huge problem.  While I appreciate the gung ho positive vibe that these families embody, allowing dogs to rehearse unwanted behaviour is a huge problem.

This combination of tough dogs and permissive owners was a perfect storm of pressure.  In a desperate effort to communicate the need for consistency, I used a standard expression.

“Nothing in Life is Free.”  There isn’t anything particularly wrong with this idea.  Dogs should learn appropriate behaviour.   We shouldn’t allow dogs to run amok.  There’s nothing wrong thus far.  My mistake was in what I omitted.

Nothing in life is free still requires good training mechanics.  I didn’t lean on this fact strongly enough.  Without a plan to increase criteria, proper timing and a fast rate of reinforcement, it creates a client that is asking too much, frustrating the dog, and using aversives.

While the distinction may be slight, let’s look at an example.  Pretend we have a dog that would like to play with other dogs, instead of sitting politely on a loose leash.

By skillfully reinforcing the animal, it learns what is expected, and is proofed to distractions.  With practice, owners can switch dogs to a variety of reinforcements.  Instead of earning a treat for sitting politely on a loose leash, the dog transitions toward learning that polite behaviour gives access to free play.  We are well within the realm of positive reinforcement and Premack Principle.  The dog gets what it wants by doing what the owner wants.

Without strong technical training skills, a very different scenario arises.  The owner fails to reach the dog, or fails to proof the dog.  Incorrectly they assume that the dog can meet expectations.  The dog, in over its head, fails to comply.  As frustration builds, the dog starts to strain at the leash.  The owner stands firm, waiting for a response that comes slowly if at all.  Very quickly, that tight leash stays tight.  Owners wait for a release of pressure.  Pressure and release – or negative reinforcement.  This negative reinforcement could have been avoided. 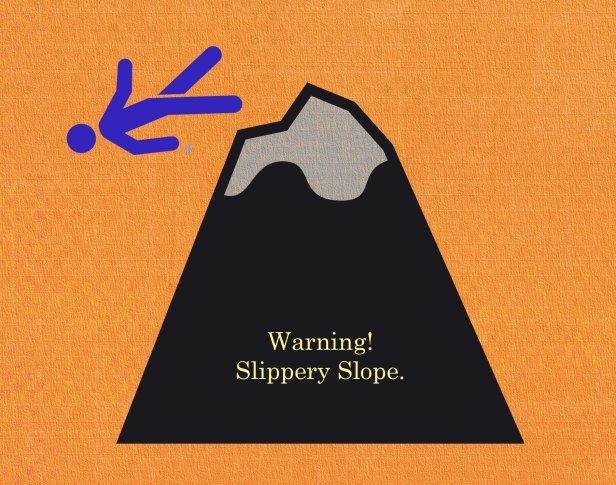 When owners spend prolonged periods of time, hanging onto a dog that is forcefully and painfully yanking at their arms, the temptation to correct increases.  It leads to a verbal correction, a touch, a poke, a little tug on the leash, a leash correction.  Each step is small – almost insignificant.  However, the changes over time culminate into dramatic differences in training methodology.

Badly done positive reinforcement is the funnel that fills the coffers of force trainers.

Poorly executed positive reinforcement strengthens the conviction that aversives are needed and frankly not that bad.  Force trainers have a valid point when they point to dogs straining against leashes.  This is not positive, nor is it kind.  Snickering, they have reason to laugh as someone aimlessly walks about or literally walks in circles doing changes of direction.

It didn’t take very long for me to recognize the error that I had made and to correct it.  Not all people do.  Some people slide down the slippery slope of aversives.  Encouragement, from other individuals who feel similarly makes it seem more palatable.  If others were also failed by positive reinforcement, it’s easier to blame the method than to admit to screwing up.

Others, seeing that they are sliding, dig their nails into the dirt, pulling themselves back up to where they want to be.  Despite erring, they bravely swallow that bitter pill.  Holy heck does it hurt.  Recognizing that the frustration in the dog’s eyes is a result of our shortcomings is excruciating.  I’ve slipped into that tenuous place where a “little firmness” or some “natural consequences” look tempting.  I’ve immediately regretted that misstep.

Owning our mistakes and our mechanics is a good thing.  We are all fallible human beings.  Making mistakes is to be expected.  Repeating them because we wear blinders made of ego is wrong.  Since we all make mistakes, our first course of action prior to sliding into aversives is to find our own errors.  Failing that, we need a trustworthy, honest person to give a second opinion.  Hubris does not belong in dog training.

Stepping out onto the precipice is costly.  It absolves trainers of personal reflection and growth.  As we habituate to minor aversives, what was once unthinkable gradually becomes acceptable.

Poor mechanics create a need for aversives.  Aversives come bundled with side effects.  Perhaps there are trainers who are comfortable with minor aversives.  Perhaps they feel that the results that they obtain are good enough.  I hope that they also embrace the term balanced in their marketing material.

If we want positive reinforcement to be a method that appeals to the masses, then we need to deliver on results.  That will only happen if we all embrace the idea that our learning never stops.  The experience of training in the zone of correctly executed positive reinforcement is something that words cannot describe.  Unless one has been there, you cannot understand how quickly and efficiently the results come.  Only by experiencing these results can one understand the importance of rallying for professional proficiency.  Only then can someone understand why it’s so critical to rally against the slippery slope that lack luster mechanics can bring.

We can always develop our mechanics and technical abilities just a little bit more.  Only perfect people have a right to claim otherwise.  I just don’t happen to know any perfect people.