I have read a lot of social media posts lately on the topic of shock collars.  Specifically, proponents claim that:

Modern shock collars do not cause pain.  It is a mild tingle, a tickle.  It is very much like a tens machine used by physiotherapists to heal people.  Like the wee little pop of carpet static, the reaction is startle and not pain.  This idea is substantiated with statistics.  Bark collars, at 0.0003 joules are far gentler than an abdominal energizer – coming in at 0.914 joules of energy.

Here’s the problem with joules and volts.  You can’t say, “This amount of shock will kill you.”  It’s complicated.

For example, consider the follow three people who were shocked:

Thankfully, carpet static doesn’t kill people because the duration is too short and most of the charge dissipates through the air before it reaches you.  Make no mistake, it is powerful.  Much lower voltage can be more dangerous.  There are some generally accepted levels, in amps, from Georgia University, and it includes information on the physiological effects at different levels – such as can’t let go effect, and serious health concerns.

The construction worker had protection in the form of insulating boots.  Unlike the homeowner with wet bare feet, who was a serious accident waiting to happen.  And yet the volts on those two were the same.

That’s what makes this whole shock collar debate interesting and complex.  Knowing whether shock hurts is a challenging question. How is shock pain measured?

Researchers involved in pain studies use amps.  So I went back to lessons from high school to try to sort through the confusion.  I can remember the teacher saying:

Think of electricity like a water hose.  Volts are your water pressure.  Resistance is the dirt that’s gotten clogged in the hose.  It will slow down pressure. So will holes in the hose that let water escape.  Amps is the “oomph” you have at the end of the hose when all is said and done. There is a profound difference between the dribble of a clogged garden hose and the gush of a fire hose putting out a fire.  The blast from a pressure washer has got to sting, but I’m not about to volunteer to try that out.  Really, it doesn’t matter how much water is going in the hose.  It’s about how much oomph is coming out.

That’s what Ohm’s law is about. You have power going into a wire.  Maybe some dissipates into the air.  Maybe there is some resistance, something getting in the way of the current like skin or hair.  Maybe the wire is high quality and really lets that current flow strong.  These impact the amount of amperage.

If you have all the information, the voltage, the way the product is made and the resistance, then you could do math calculations.  That’s a bit tricky and presumes that the information is readily available.

How many amps hurt?  Amperage, at this level is usually written in milliamps, or one thousandth of an amp.  Researchers involved in pain research, often use shock to cause pain.  For example, they shock subjects and measure how much pain the individual can handle.  Then, they might give pain medications, re-shocking the individual to see if the drugs were effective.  The following is a list of pain thresholds taken from a sampling of pain studies.

Why do we have pain thresholds for animals?  Pain medications are tested on animals.  So researchers need to know how much pain an animal will tolerate.  These are tail twitch studies.

How many amps do shock collars deliver?  It’s a tough number to find, but a few retailers and pro-shock education sites do offer numbers..

Shock collar proponents state that modern electronic training systems are gentler than older versions.  Christiansen and Shalke are older studies. I’ll concede that point and remove them.  How do shock collars stack up against the pain research numbers in a graph, using milliamps? 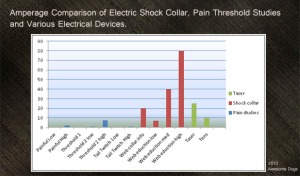 Update:  June 11, 2013
Radio systems references the amps on “modern” training collars.  It directs people to a study that claims that the collars run from 30 to 80 mA.  These numbers are from a report, direct from the manufacturer.  (Page 3)  Another section of the same report, references 100 mA.  As with all the other shock collar data, taken from a pro-shock reference.

Update:  July 3, 2013
I welcome additional statistics, and have openly stated I would like to see data from the shock collar trainers and sales reps that have commented.  Some said they were contacting the company directly.  See below in the comments.  Nothing yet and not surprised.  Still open to getting the full range of amps on collars under a variety of conditions. Dry, wet, salt water.

229 thoughts on “Do shock collars hurt? It’s the amps not the volts.”